On May 18, the US Court of Appeals for the Fifth Circuit issued a ruling with the potential to disrupt how the Securities and Exchange Commission has managed enforcement actions for over a decade. The ruling in Jarkesy vs. SEC vacated a decision handed down by the Commission’s administrative judge, in part on the grounds that the defendant was denied the right to trial.

In 2013, the SEC charged right-wing radio talk show host and market pundit George Jarkesy with securities fraud relating to a hedge fund he promoted and claimed to manage. John Thomas Financial, a since-shuttered “boiler room” brokerage, marketed the fund, inflating the value of illiquid assets to reap larger management fees. In an administrative hearing, the SEC handed down a $300,000 fine and nearly $690,000 in profit disgorgements to Jarkesy and the fund’s management company, Patriot28, and barred them from the securities industry.

Jarkesy successfully appealed the SEC’s administrative decision on Constitutional grounds. “The ruling focused on three things,” notes Brian Thompson, an associate attorney at Ruddy Gregory focused on securities law. “The right to a jury trial. The non-delegation doctrine, which refers to the SEC’s unfettered discretion to choose between an administrative proceeding or federal court. And the ‘take-care’ clause of Article Two of the Constitution.

“The court ruled that the delegation of legislative authority violated Article One of the Constitution because Congress did not provide any intelligible principle to guide the SEC in selecting between civil courts or administrative judges.”

The Dodd-Frank Act of 2010 allowed the SEC to adjudicate securities fraud cases within its own administrative forum without a jury rather than in a traditional court. A report released by law firm Sullivan & Cromwell following the decision stated: “If this result stands, within the Fifth Circuit, which covers Texas, Louisiana, and Mississippi, the SEC will no longer be able to bring enforcement actions seeking civil penalties for fraud in agency proceedings and must instead bring those claims in federal court.”

Strong political currents run through the case. Republican leaders have long pushed to diminish the power of federal bureaucracies to enforce laws without Congressional approval. The SEC is one of more than 20 federal agencies with the ability to rely on administrative proceedings instead of courts to pursue monetary damages, and conservatives have targeted the practice as governmental overreach.

According to Sullivan & Cromwell, the Fifth Circuit ruling cut to the heart of this debate. “Because Congress has not given the SEC any guidance as to how to decide between pursuing an action in federal court or alternatively in agency proceedings and because that decision is legislative in nature, the grant of authority violates Article [One] of the Constitution, which provides that ‘all legislative powers’ are vested in Congress, rather than an agency.”

Two of the judges in the majority decision have a history of controversial stances. Judge Jennifer Walker Elrod rose to prominence by writing an opinion striking down the Affordable Care Act’s individual mandate. Trump administration appointee Andrew Oldham recently delivered some harsh questioning during a hearing on a Texas law requiring large social media companies to allow content they deem offensive or dangerous to be published on their platforms. An unsigned, one-line opinion upheld the law, which the Supreme Court has since stayed.

According to Thompson’s analysis, the Fifth Circuit’s ruling is also likely to weaken the tenure protection afforded to administrative law judges, ultimately making them less independent from the Commission and from the President who appointed them. “While solving one Constitutional defect in the ruling, the judges are also limiting the independence of administrative law judges. This may amplify concerns that respondents in administrative enforcement actions are not afforded due process because they don’t appear before a neutral arbitrator and have significant limitations placed on their defense that do not exist in federal court.”

That prospect provides little comfort to litigators like Thompson seeking a resolution to open questions. “I don’t know if anyone wants to rely on Congress for something like this, given the inertia there.” 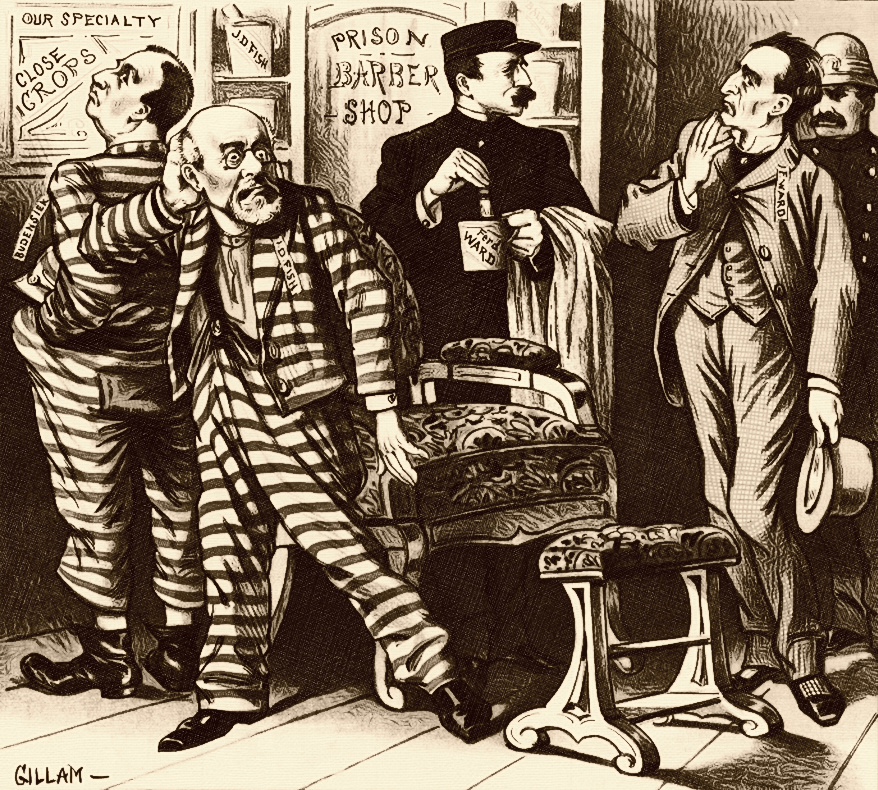 Unwelcome Reunion — An illustration from the cover of the July 8, 1885, edition of Puck depicts convicted Ponzi operator Ferdinand Ward arriving in a prison barbershop. Before being uncovered as a fraud, Ward had amassed a personal fortune and a reputation as the “Napoleon of Wall Street,” aided by Marine National Bank CEO James Fish (also depicted in the cartoon). Ward’s brokerage firm, Grant & Ward, had both then-serving President Ulysses S. Grant and his son as partners. The failure of Grant & Ward bankrupted many investors, including President Grant, who wrote his memoirs while dying to shore up his personal finances. After a conviction by jury and a decade in New York’s Sing Sing prison, Ward remained unrepentant. The swindler went on to orchestrate the kidnapping of his own son to access money he inherited from his mother, Ward’s deceased wife.