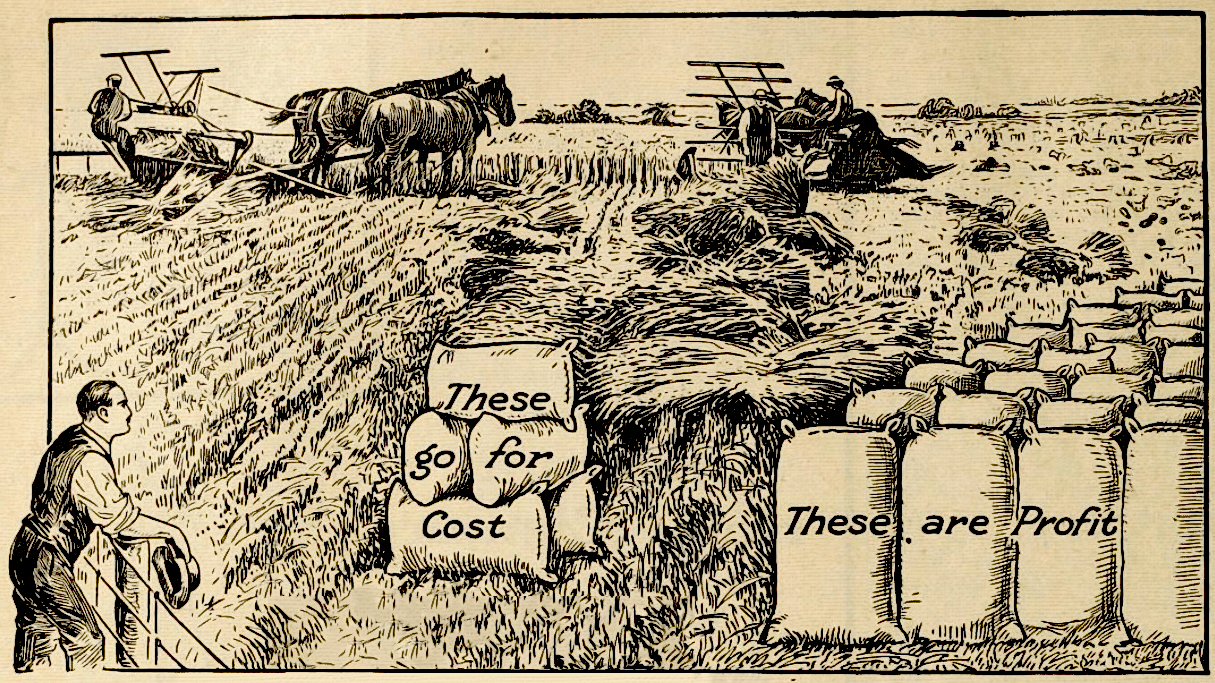 IT PAYS TO FIGURE IT OUT — In a 1920 edition of Farmer’s Magazine, an advertisement from the Canadian Fertilizer Association informed readers that “If, as the US Government reported, it costs $2.16 to grow a bushel of wheat, these figures must have been reached on a yield basis of not more than 12 bushels per acre.” According to the advertisement, US farmers purchasing Canadian fertilizers could expect up to 20 bushels per acre, dramatically increasing their profits.

Beyond presenting a tragic loss of life and a struggle to reshape global alliances, the Russian attack on Ukraine has disrupted global food supplies. The humanitarian and market implications are massive.

The conflict in Europe, and resulting trade sanctions, stand to affect commodities running the spectrum from oil and gas to nickel and neon; however, global grain markets are feeling the most immediate impact. According to World Bank estimates, Ukraine and Russia have accounted for more than 25 percent of global wheat exports in recent years.

Disruption of Ukrainian grain markets will be felt acutely in the import-dependent regions of North Africa and the Middle East, with multiple NGO and national officials sounding alarms. During the G7 conference in Weissenhaus two weeks ago, German Foreign Minister Annalena Baerbock warned as many as 50 million people in the MENA region could go hungry this summer.

The risk is not limited to humanitarian crises. In a note issued last Friday titled “Days of Rage,” RBC commodity analyst Michael Tran noted that several countries at high risk for emergency flooding saw their governments fall in the 2011 Arab Spring, with Egypt appearing particularly vulnerable to unrest. According to Tran, “Egypt is the largest importer of wheat, with 80 percent coming from Ukraine and Russia, and bread riots have posed serious challenges.”

While the price of bread in regional markets is alarming, the shock is not limited to one region or nutritional staple. As primary suppliers of potash fertilized seed oils, the Black Sea region affects global agriculture and food production extending far beyond the price of wheat and barley.

Even before the Russian invasion of Ukraine, 2022 was shaping up to be a challenging year for staple grain production. “Before the invasion, world wheat ending stocks were projected at a five-year low, and more than half of those stocks were in China,” said Third Street Ag trading head Chad Burlet. “World corn stocks were expected to be the second-lowest in seven years, and the weather in South America had turned less favorable.”

The UN’s Food and Agriculture Organization now estimates the conflict has prevented 25 million metric tons of Ukrainian wheat from reaching global markets this spring, turning a bad season into a crisis. Some governments have taken extreme measures.

On May 20, India’s federal government surprised markets when it announced a ban on grain exports. The move by Prime Minister Modi’s administration was particularly jarring following weeks of claims by the Indian government that the nation could increase grain exports to nearly double the 8.2 million metric tons shipped abroad in the seasonal production year that ended in March. Political critics of the regime identified a failure to secure sufficient wheat for food security programs to aid the poor before the spike in global prices.

Decisions like India’s may well do more harm than good. A 2019 study by the World Bank concluded that trade policy intervention at the national level, undertaken simultaneously by multiple vulnerable economies, compounded price volatility during the 2008 inflationary food cycle. The bank’s researchers concluded that direct aid for hungry populations was less disruptive.

In derivatives markets, this supply shock has reverberated across the entire agricultural sector. Front-month futures contracts for Chicago SRW Wheat, Soybeans, and Corn have risen by 53 percent, 26 percent, and 34 percent year-to-date. Wheat prices reached an all-time high last month, breaching the prior record achieved in the spring of 2008 during the so-called “super cycle.”

The dramatic uptick in futures markets, confined mainly to large institutional and corporate traders, has been reflected in retail investor sentiment. According to Morningstar data, more than $21 billion in total net-new investments have flowed into commodity ETFs in 2022. The Teucrium Wheat Fund (WEAT) has seen assets under management swell by more than 520 percent over the trailing 12 months.

US and European Public Companies Feel the Pressure

In a May 12 note, ING economist Thijs Geijer estimated the contribution of food shortages to higher food prices for European consumers. Geijer noted general inflation has increased year-to-date, and food inflation in the Eurozone will hover around 6 percent for the second half of the year. Geijer says guidance from major European food producers, including Nestlé, Unilever, and Danone, supports this view. All have signaled a willingness to pass higher input costs through to consumers.

The situation is mirrored in the US. In a report published last week, Goldman Sachs research analyst Jason English indicated that consumer staples companies have successfully passed rising costs to shoppers. He predicts, though, that this will end when exhausted consumers push back. English wrote, “Rising pricing friction between retailers and manufacturers is inevitable,” adding, “we have not seen CPG manufacturers pass through price increases to retailers with this much ease since the 1990s.”

English noted that Walmart, the dominant grocer in an increasing number of US markets, clearly anticipates negotiating lower costs from their processed food vendors. [1] Using Walmart to measure the industry as a whole, English concluded that margins will come in at food producers in coming quarters, and he is a seller of US-centric household and food companies, such as General Mills and Kraft Heinz.

Consumer staples are not the only sector feeling the impact. English’s Goldman colleague Jerry Revich issued a note on agricultural machinery giant Deere & Co. following a 22 percent EBIT miss during the second quarter. While the decline in earnings drove Deere’s share price down by over 14 percent initially on the news, Revich remained cautiously bullish as rising farm income stands to translate to increased investment in new equipment. 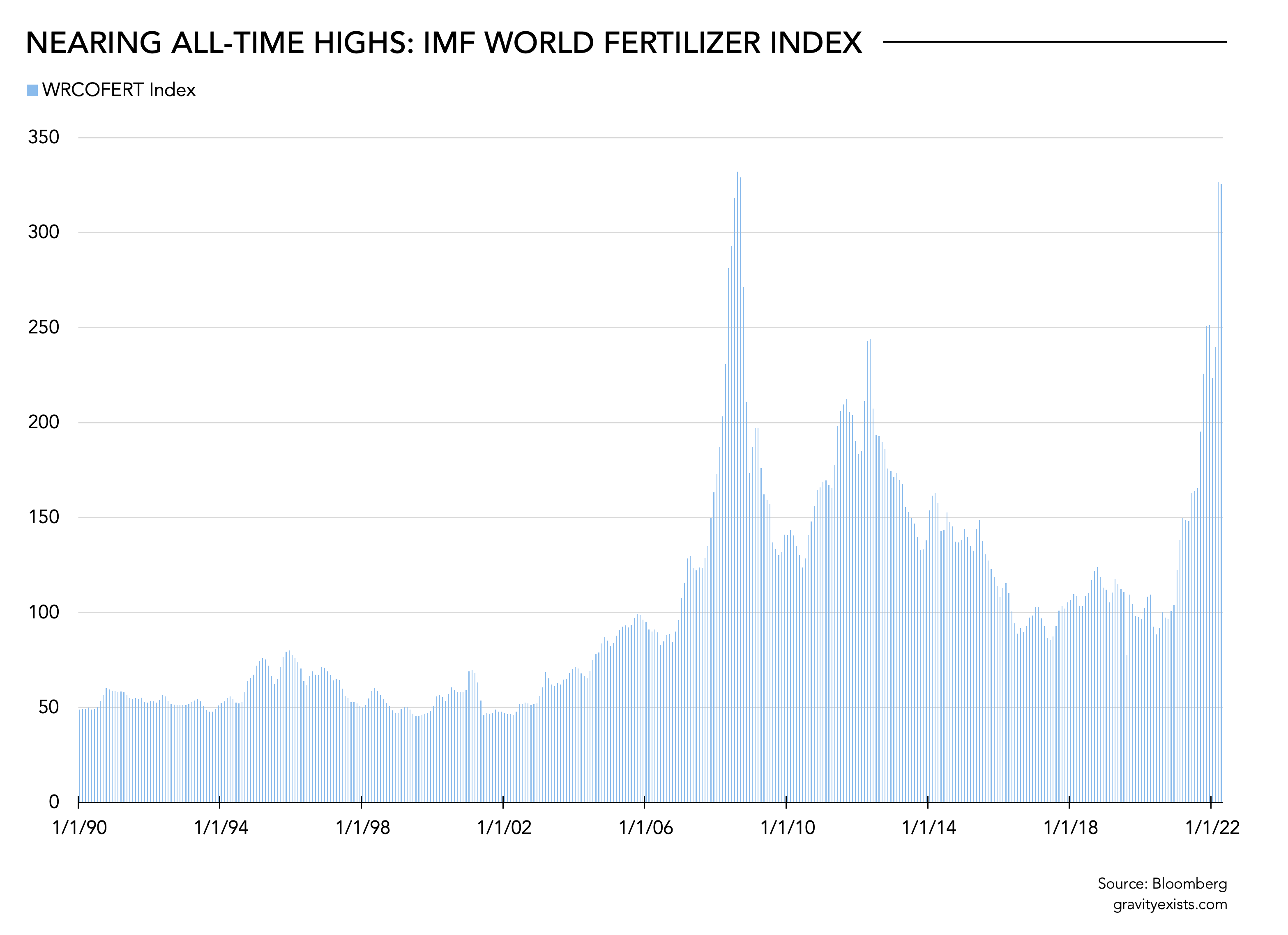 NEARING ALL-TIME HIGHS — According to IMF data, in early 2022, as Ukrainian supplies departed from global markets, fertilizer prices rose to near all-time high levels before moderating in recent months. Both Diammonium phosphate (DAP) and Potash prices rose in tandem after the Russian invasion, representing a significant drag on farmer margins threatening to offset rising crop prices. Although prices have dropped significantly, there are signals that the decline may be due to demand destruction as farmers in developing markets go without.