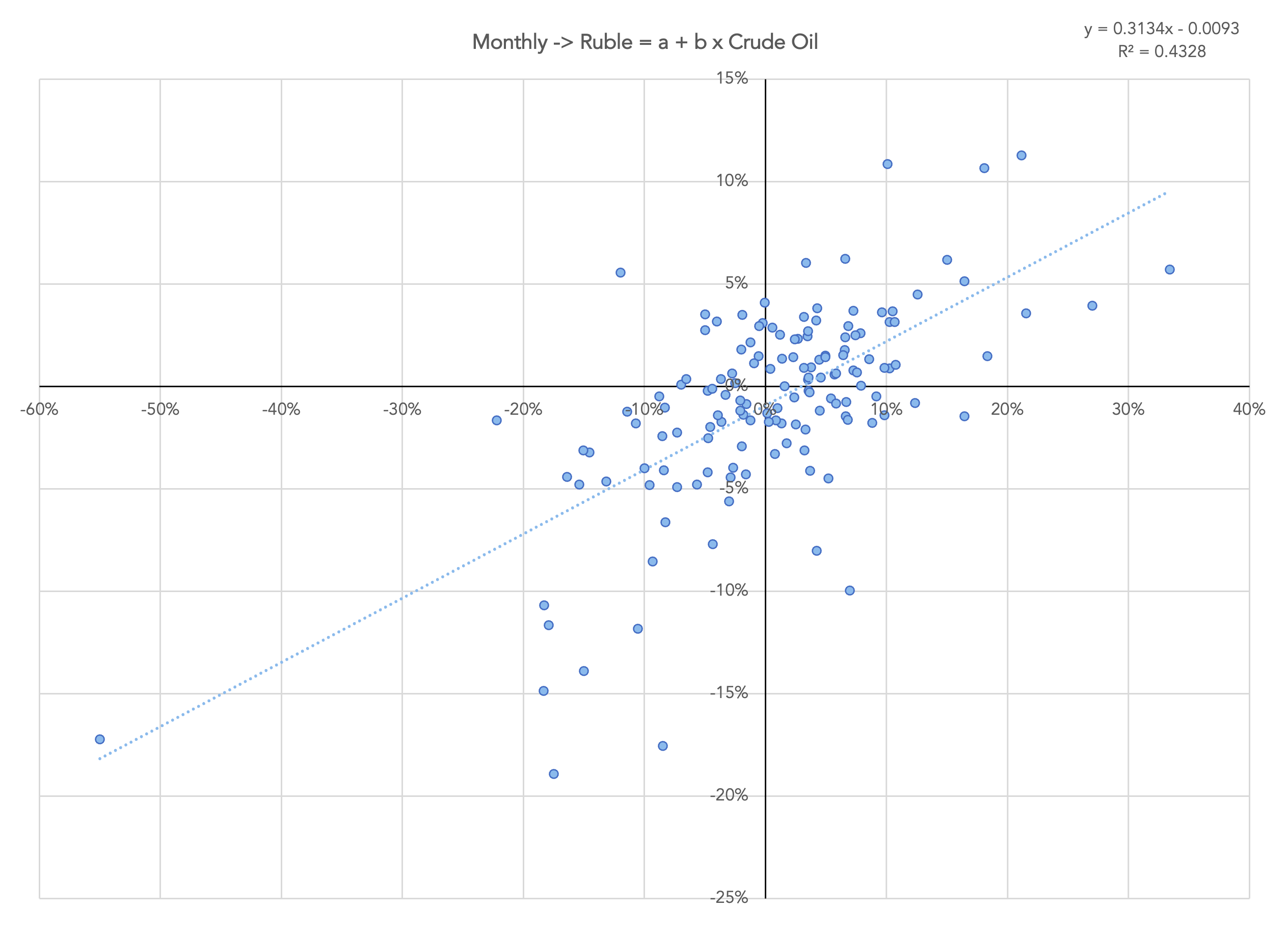 Ruble — Although Russia’s currency has returned to pre-war levels, it may still be below the fundamental value implied by price levels for commodity exports. In this simple regression setting provided by the research department at SummerHaven Investment Management, the relationship between oil prices and the Ruble’s conversion rate is clear: As oil goes up, so does the Ruble. The year-to-date rally in US benchmark crude has been roughly 27 percent, which would imply a Ruble price of 68.9. based on the historical relationship. NOTE: The data for the chart is derived from monthly measurements with an inverted currency rate to align visuals.

After the Ruble collapsed to all-time lows following international sanctions placed upon Russia for its invasion of Ukraine, it has rebounded to pre-war levels. The Kremlin has played up the resurgence of Russia’s currency for propaganda purposes, but traders and analysts are skeptical that the bounce is sustainable.

While the US, EU, and other major democracies have piled increasing financial sanctions on Russia and its leadership, the pariah nation has continued to find willing buyers for oil and natural gas exports. Even with sanctions in place, economists expect that Russian energy exports for 2022 will exceed $300 billion, an increase of 25 percent over 2021 levels.

Although robust oil and gas sales have helped buoy the Ruble, the reversal from a low of 140 per US Dollar to almost 80 is due in large part to extreme capital controls imposed by the Kremlin. Russian regulators have compelled domestic exporters to convert 80 percent of their foreign currency reserves into Rubles at a fixed rate and limited individual withdrawals to $10,000. The decision by the Russian Central Bank to raise its benchmark rate to 20 percent before moderating to 17 last week, combined with a temporary program to buy gold at a fixed price, also aided in propping up the currency.

Critically, this return to pre-war levels only reflects the domestic market. Major Western banks and speculators are barred from making transactions in Rubles, and most institutional investors are shunning Russian Assets. The start of the Ukrainian war prompted the currency to trade at record-low volumes abroad. According to a major international bank trader: “I can’t trade it. None of the big clients want to trade it. And any quotes from the Russian banks are meaningless to foreign buyers if they did want to trade.”

Despite arguments that the Ruble’s current price does not reflect economic reality, experts warn the Kremlin may be able to sustain current levels if they continue to find willing buyers for their energy exports in the West. In a note from April 8, Berenberg currency strategist Moritz Paysen noted, “As long as Russia continues to find trading partners for currency transactions outside of the US Dollar and Euro, the Ruble exchange rate can be supported. Only when the original source of money from energy exports dries up will the Ruble again lose a lot of value.”