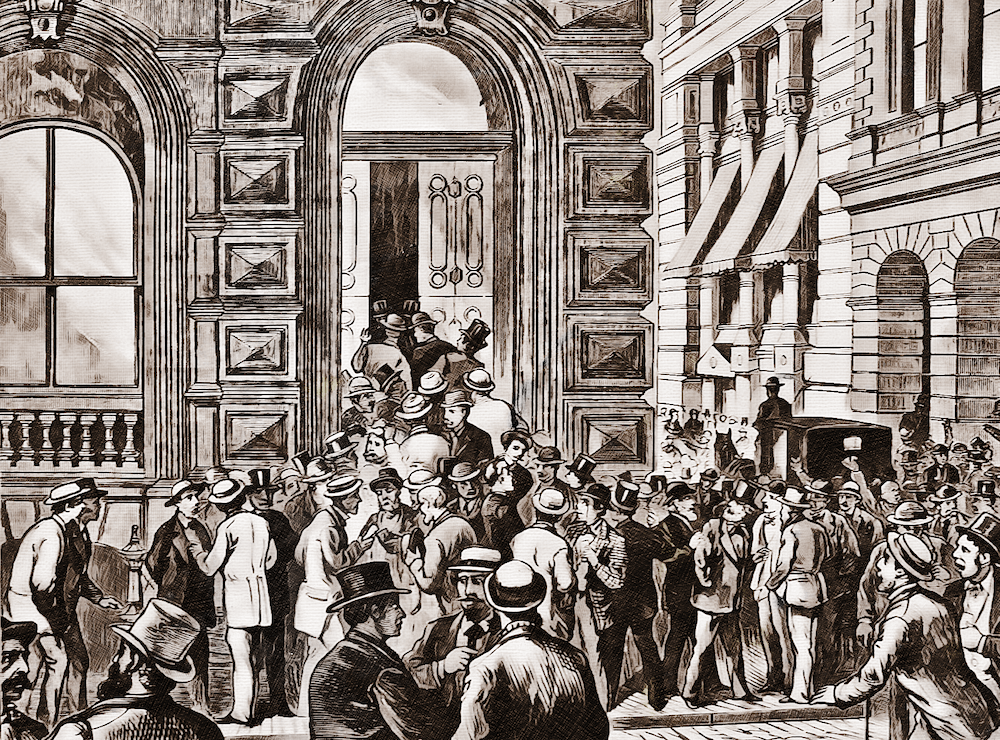 RUN ON THE BANK — The investment house Duncan, Sherman & Company was founded in New York in the early 1850s. Over two successful decades, it was active in railroads and industrial finance. JP Morgan served an apprenticeship as a clerk at the firm prior to the outbreak of the Civil War. Duncan, Sherman & Company failed in July 1875, sending shockwaves through the New York banking world. According to a New York Times report, the default was triggered by “large advances on subsequently depreciated cotton and investment in poor securities.” Illustration from a period engraving depicting creditors descending on Duncan, Sherman & Company’s office.

During the 13 years since the first Bitcoin transfer, cryptocurrency promoters insisted digital assets provide a hedge against inflation, geopolitical instability, and liquidity disruptions. However, over the first five months of 2022, investors have seen digital assets fail holders on all three counts.

As inflation and the Russian invasion of Ukraine drove global stock and bond markets lower, Bitcoin, Ethereum, and other crypto tokens sold off sharply as well. A tight correlation between crypto and large-cap tech stocks undermines the argument that they provide diversification. Meanwhile, Western regulators’ successes in halting crypto transactions by sanctioned Russian firms and individuals weakened the digital money’s promise of anonymity.

Volatility among stablecoins this week brought new pain to the sector. These tokens are a critical part of the crypto ecosystem, where tokens with values tied to real currencies act as a medium of exchange for money transfers between the digital and the real world. The collapse of TerraUSD (UST), a stablecoin with a capitalization of almost $19 billion before this week, sent shockwaves through the digital investment community as a liquidity disruption quickly took on the appearance of an old-fashioned bank run.

More than 15 percent of the adult US population has dabbled in crypto to some extent, according to a 2021 Pew Research Center survey. And while major Wall Street firms, including Morgan Stanley, JP Morgan, and Goldman Sachs, began facilitating investments in the sector directly or through funds last year, few wealth managers hold the volatile assets in discretionary managed accounts.

Despite crypto’s slow adoption by wealth managers, the implications of the selloff are potentially significant. This is due in large part to crypto-related investments by venture capital managers.

PitchBook estimates that investors put $128 billion into US-based venture capital funds in 2021, a 48 percent increase over the prior year. While interest in early-stage investments has ballooned, private wealth has become an increasing focus of fundraising by venture managers.

The increased exposure is most pronounced in the top quintile by account size. According to a survey conducted by Silicon Valley Bank in conjunction with Campden Wealth, the average venture allocation among family offices globally was 12 percent of their total portfolio in 2021 versus 10 percent in 2020. While fintech exposures — including crypto, blockchain, alternative lending, and other segments — accounted for just 15 percent of these allocations in total, recent transaction data suggest that venture managers’ percentage of crypto investments in recent vintage funds has grown significantly.

Venture capital fully embraced digital assets in 2021. In a January report, PwC estimated that the total value of crypto fundraising increased by 645 percent in 2021, with the average fundraising size rising by 143 percent versus the prior year. Galaxy Digital, a crypto investment firm, puts the total dollar value committed last year at $33 billion. While that amount accounts for just five percent of the total invested in the venture segments, the vast majority was committed to seed and very early-stage investment rounds, which bear greater risk than more established growth companies. What’s more, Galaxy Digital estimates that the valuations for crypto startups invested by venture managers in 2021 exceeded the average for all sectors by 141 percent.

With these storm clouds hanging over digital assets, one might assume investors would be reluctant to risk more capital in the space. So far, however, the turmoil in crypto markets does not appear to have spoiled the appetites of early-stage investors.

Venture capital managers have remained remarkably bullish on the sector year-to-date. Late-stage valuations for VC-backed crypto and blockchain portfolio companies rose 91 percent on average to $3.95 billion during the first four months of 2022, according to PitchBook. During the same period, average global late-stage VC valuations in all sectors contracted by 14 percent, while Coinbase Global, the largest publicly traded crypto company, declined by more than 40 percent. While there are signals that venture manager commitments to new entrants are slowing, reported valuations remain historically high. 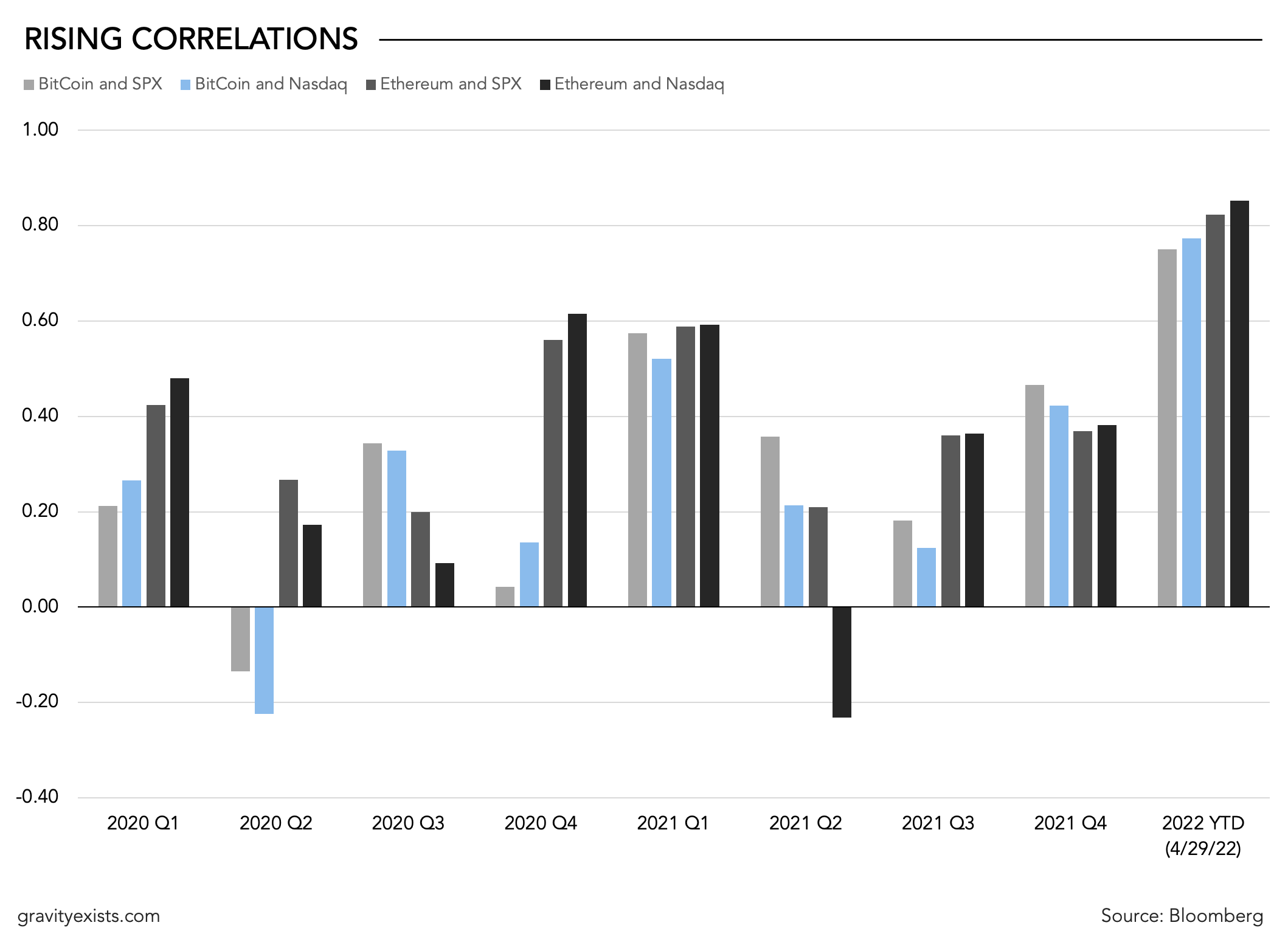 Unhedged — Despite the insistence of crypto zealots, such as ARK Invest‘s Cathie Wood, that Bitcoin and other digital assets will help investors weather inflation, the data says otherwise. During recent periods of high equity market volatility, the correlations between large-cap tech stocks and crypto across some time measures have flirted with 1. 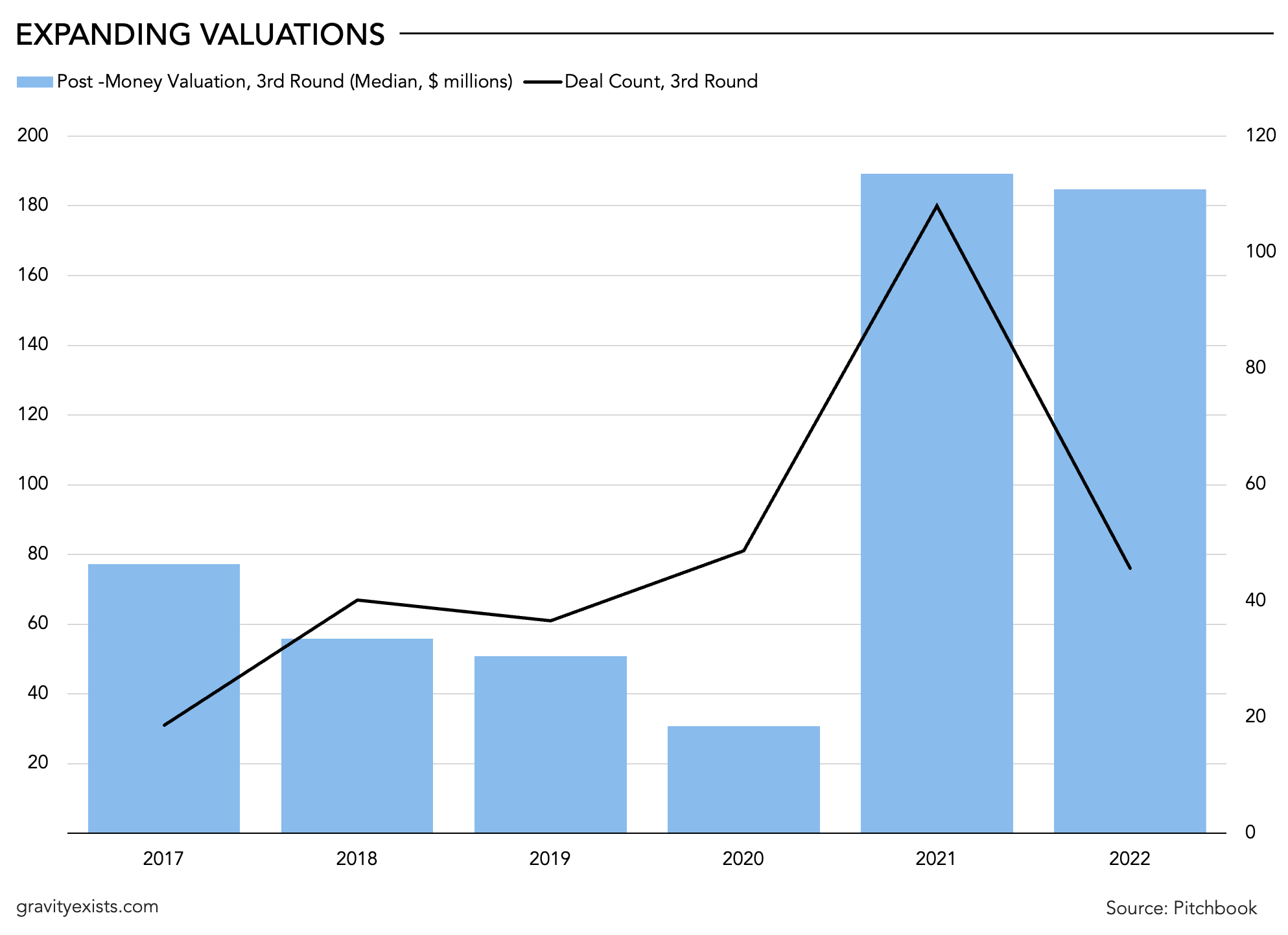 Undaunted Bulls — As investment capital flowed into the crypto space at a record pace last year, valuations rose sharply. Despite a drawdown of over $1 trillion in November of last year for Crypto market cap in aggregate, the enthusiasm of venture capitalists is undiminished. According to data from Pitchbook, VCs invested over $5 billion into crypto and blockchain companies during the first quarter of 2022.