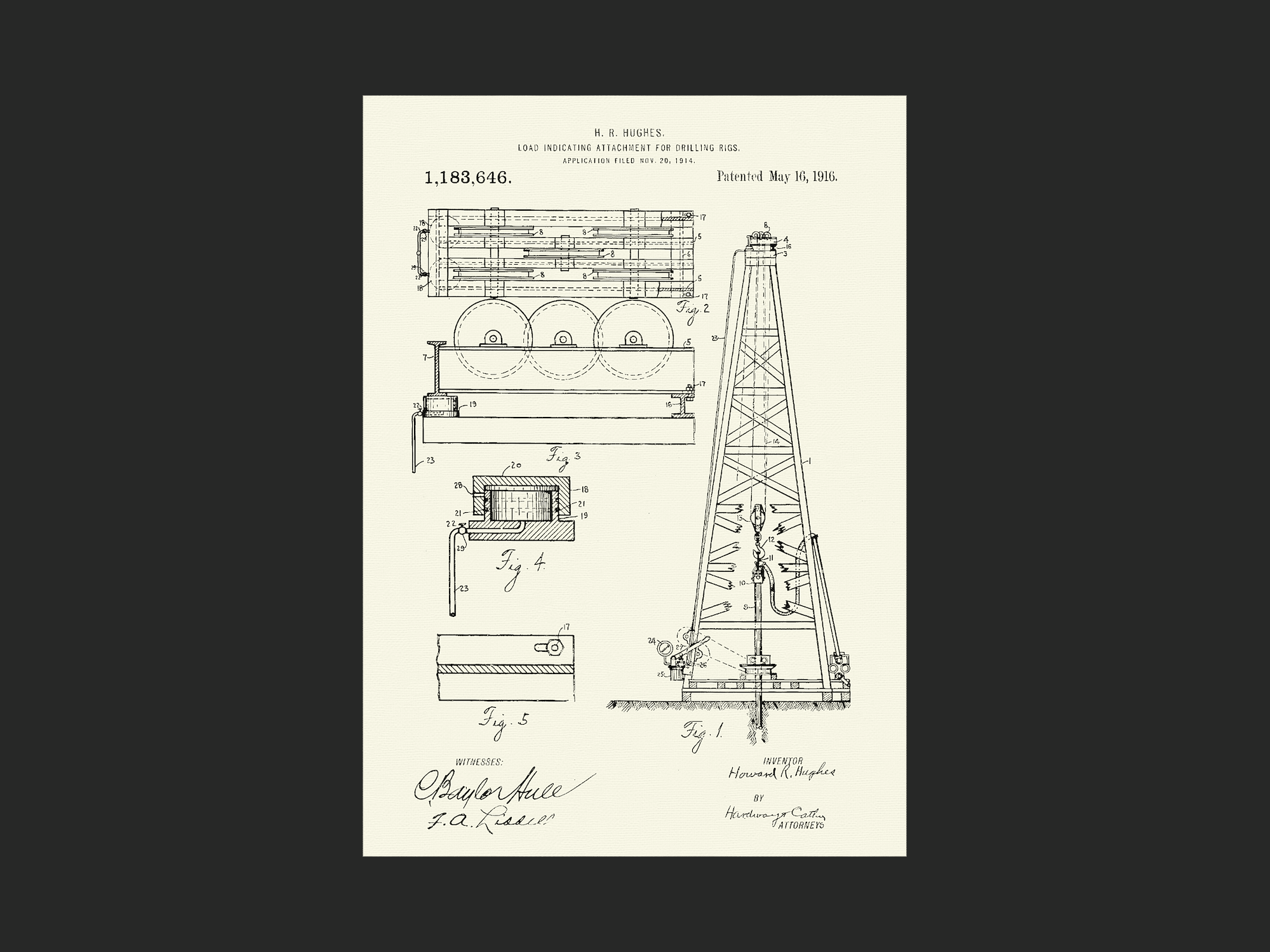 Drilling Rig Patent — A 1914 patent secured by Howard R. Hughes Sr., CEO of the Sharp-Hughes Tool Company, for a drilling rig load indicator. At the time of filing, Sharp-Hughes was expanding rapidly due to the success of the company’s two-cone rotary drill bit, which revolutionized oil drilling in the US. Later renamed the Hughes Tool Company, the firm served as the financial foundation for Hughes’ more famous son to develop his business empire. Hughes Tool Company is a corporate ancestor of Baker Hughes (NYSE: BKR), which announced second-quarter earnings this week, registering below consensus forecasts, despite a 14 percent year-over-year growth in oilfield services revenues.

A fist-bump between President Biden and Saudi Crown Prince Mohammed bin Salman dominated early headlines. But it’s as yet unknown if Biden achieved the primary purpose of his trip: securing a commitment by the world’s largest oil producer to expand production beyond an already planned OPEC+ output acceleration. Saudi leaders insisted that any increase would require agreement among all organization members. White House spokesperson Karine Jean-Pierre expressed confidence that Saudi influence would lead to additional production in the coming weeks. In the face of these mixed signals, oil markets retreated sharply.

WTI front-month oil futures closed below the $96-per-barrel mark last week for the first time since April, rebounding to slightly over $100 in recent sessions, only to retreat again. This selloff, driven by increased concerns over a possible recession, weighed equally on ICE Brent contracts. The decline is a welcome relief for the Biden administration after crude prices in March rose to the highest level since the 2008 credit crisis, dramatically increasing the cost of gasoline to consumers.

While oil price softness is a positive signal for US consumers, many analysts warn that this respite cannot last if strong fundamentals remain in play. Recent public remarks by energy company executives, including ExxonMobil CEO Darren Woods, and current statements issued by OPEC and the IEA, continue to underscore the tightness in the physical crude market.

In a note published last week, Michael Tran, Global Energy Strategist for RBC Capital Markets, argued that the selling pressure was misplaced. “It is not possible to have a recession without softening physical demand,” he wrote, adding, “until we see true signs of physical crude demand deterioration, we will remain constructive on our outlook for oil prices.” According to Tan, many market participants watch refined product cracks as a leading indicator of demand strength. The spot gasoline crack spread has traded off more than 25 percent since a record peak last month. Tan and his team remain bullish on oil, estimating a current fair value of Brent at $115 per barrel.

RBC’s analysts are not alone in their bullish view. A report issued earlier this week by Damien Courvalin, the head of energy research for Goldman Sachs, concluded that “with inventories at record levels and with a potential increase in Saudi/UAE production further depleting record low spare capacity, we reiterate our view that the skew to prices from here is squarely skewed to the upside.” Courvalin’s team estimates current levels for oil remain below fair price — barring any geopolitical shocks — even when factoring in a recession.

One thing almost all oil analysts appear to agree upon is that the potential for shocks is significant.According to J.P. Morgan’s Marko Kolanovic, the threat of a material new oil supply disruption has increased. “A 3 million barrel (bbl) per day retaliatory reduction in Russian oil exports is a credible threat and if realized would generate a spike in Brent crude oil prices to roughly US$190/bbl.” In a report released last week, Kolanovic, who heads macro quantitative and derivatives research for his bank, stressed that a Russian shock remains unlikely and that he expects oil to average near $100-per-barrel for the second half of 2022 before softening next year.

Last week’s EIA oil inventory data supported the tightening supply thesis as crude inventories declined by 446,000 barrels for the week, in contrast to consensus expectations for a significant increase. While crude supplies fell, gasoline inventories unexpectedly rose as refinery capacity slackened — a potentially ominous sign for US consumers at the height of vacation season.

For allocators, recent volatility for energy markets has been particularly challenging for modeling risk, as competing recession and inflation macro narratives support positive and negative short-term correlations with equities, respectively. 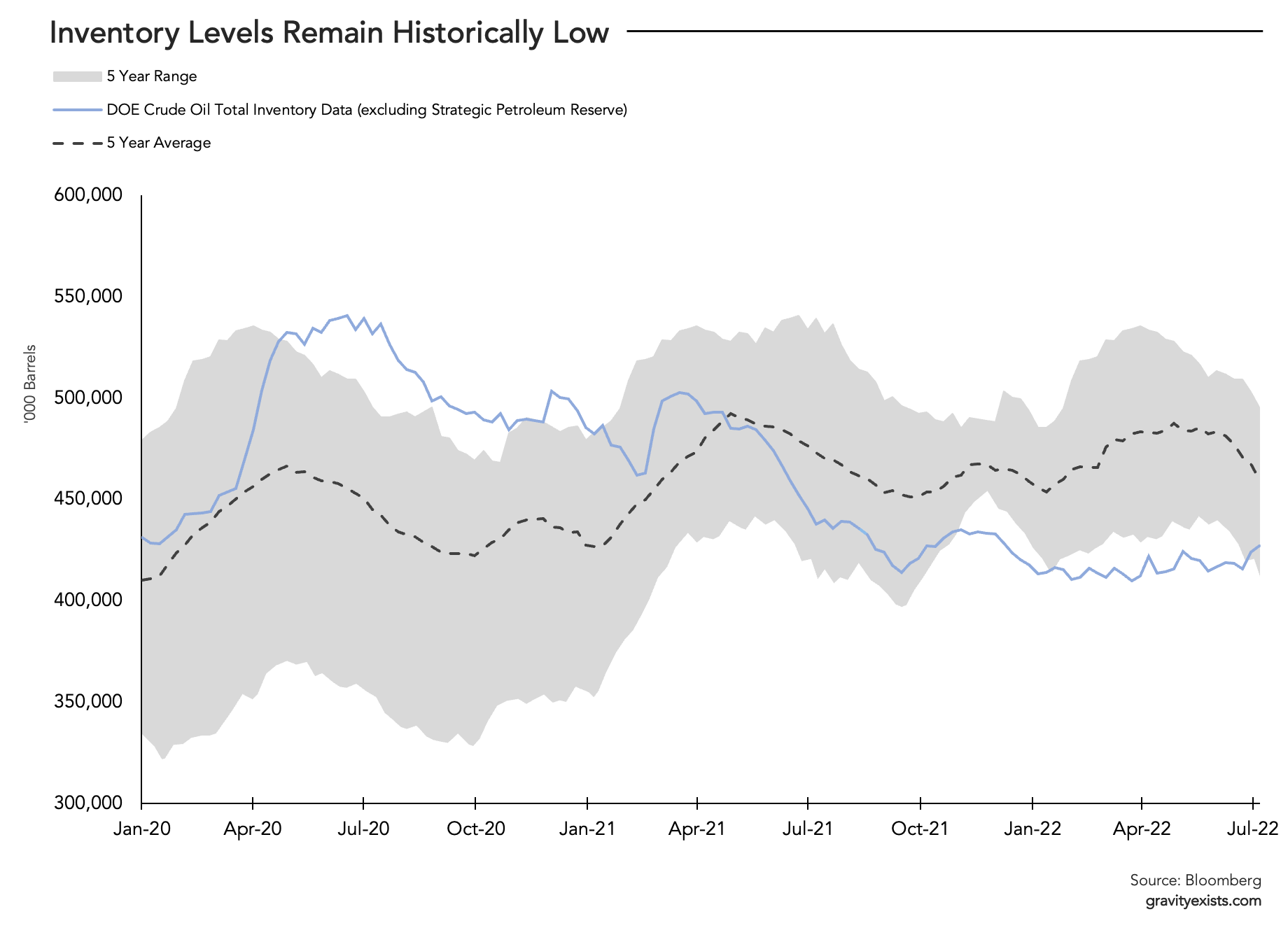