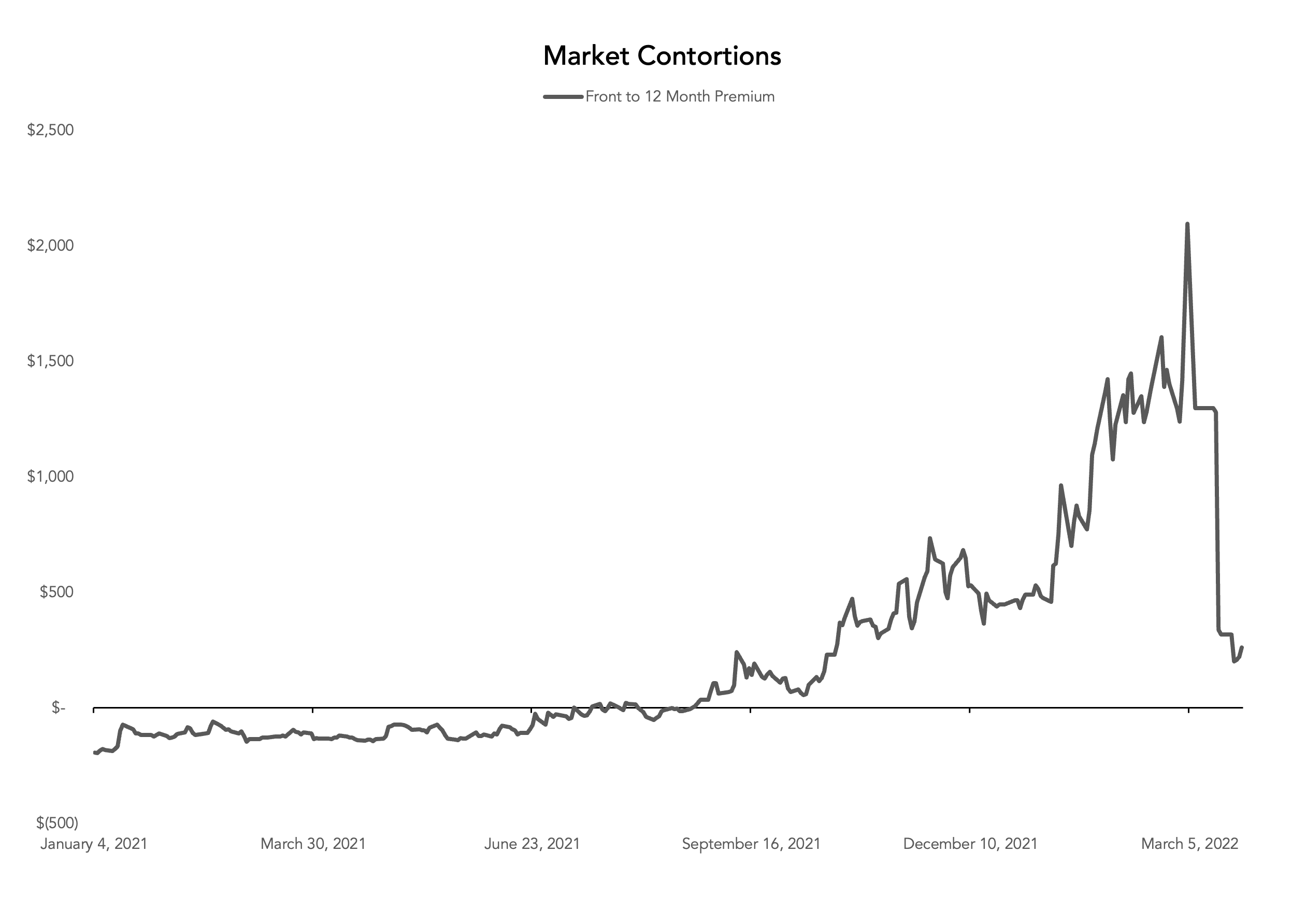 Market Contortions — In recent months the premium paid for LME nickel contracts for immediate delivery versus those for 12 months forward has risen to all-time highs.

The London Metals Exchange (LME) traces its origins to improvised trading rings outlined in chalk on the floors of 17th-century coffee houses situated on Change Alley. Since organizing in its current form in 1877, the LME has remained a global liquidity center for industrial metals. It endured the great depression, two world wars (the second of which disrupted copper trading for years) and witnessed the rise of China as the largest consumer of base metals globally.

Earlier this month a short squeeze triggered a sudden spike in LME nickel prices resulted in one of the wildest market events in decades. Now the venerable bourse finds that its reputation is in tatters at precisely the moment when the trading of metals has become critical for global producers due to supply shocks.

The price of near month delivery contracts for nickel increased by 250% in two days to reach over $1000,000 per metric ton on March 8th before trading was halted for a week by exchange officials. In the ensuing week, it emerged that the Tsingshan Group, a major Chinese industrial metal company founded by Xiang Guangda, had amassed a huge short position prior to the Russian invasion of Ukraine. As sanctions blocked off western access to Russian miners, who produce a fifth of the global nickel supply, prices rose rapidly causing massive margin calls that Tsingshan was initially unable to meet.

Ultimately the LME’s intervention rescued Mr. Guanda by canceling trades and providing time for his company to secure financing. When trading finally did resume it was halted again almost immediately as electronic trades executed beyond new circuit breakers designed to reign in volatility and transactions were again reversed.

Although large intra-day price swings have persisted since nickel resumed trading, a semblance of order has been restored as the LME introduced new daily price limit measures to control future volatility and increased the size of its default fund by nearly 100%. This measure, meant to calm traders, has so far failed to restore confidence.

While trading in nickel on the LME has become less frantic it has also become less liquid, with open interest for all products on the exchange declining by 8% since the end of the first week of March to the lowest level in over a decade. This flight of capital is explained in part by the perception that the decision to cancel executed trades for the benefit of Tsingshan was in response to pressure from Beijing.

The LME was acquired by Hong Kong Exchanges & Clearing for more than $2 billion in 2012. Despite strong new ties to China via its’ new parent company, the exchange saw its market share erode in recent years as the Shanghai Metal Exchange rose in prominence as a price discovery hub for mainland buyers.

Following the debacle in nickel, many traders have expressed outrage that Mr. Guanda was bailed out at the expense of smaller long investors whose transactions were canceled. In the face of this combination of declining relevance and backroom collusion, a long shadow has been cast over the future of the LME.

Meanwhile, nickel prices are still on course to register a 45% gain for the month with contracts for near-term delivery sharply elevated relative to longer-dated levels (see chart).

The full impact of this sharp rise in prices may not be felt across the industrial complex for months. In a report issued earlier this month, KeyBanc Capital Markets research analyst Phillip Gibbs wrote that higher nickel pricing pass-through should have a benign impact on sectors including commercial aerospace engine and energy products, where lead times for purchasing materials often extend beyond a year and hedging programs are used.

In the same note, however, Gibbs warned that inflated nickel prices “could certainly be demand-destructive to earlier-cycle, consumer-facing markets like automotive, appliance/consumer durables, and food processing.” In the wake of the sudden runup in nickel and other metals necessary for battery production, both Tesla and Chinese electric automaker BYD raised prices on new orders.