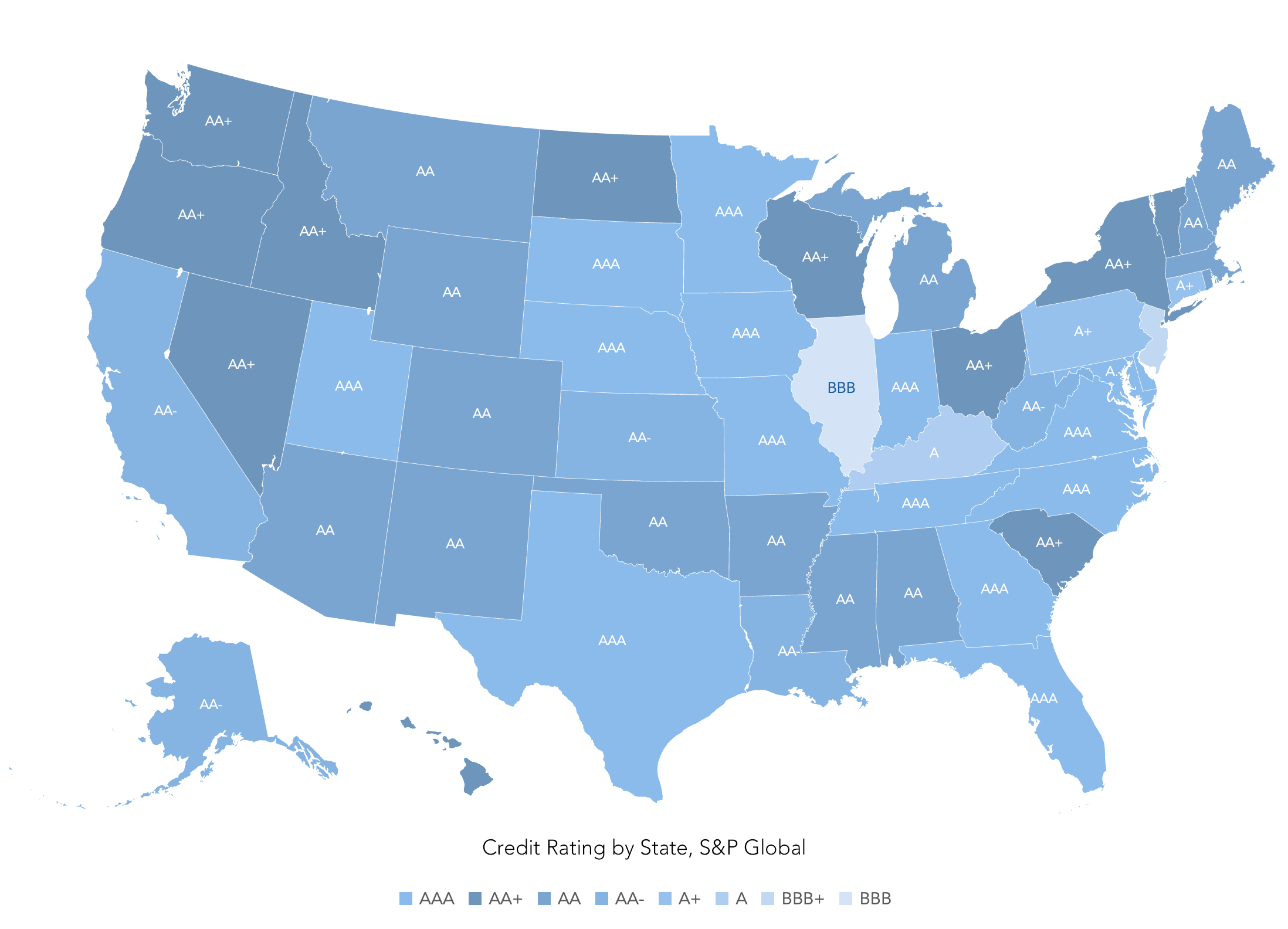 Municipal bonds, traditionally seen as sources of stable long-term returns by allocators, were hit hard by the about-face. During the first two months of the year, municipal bond prices declined by the most in more than a decade as Muni mutual funds and ETFs realized combined outflows of $13.4 billion, according to estimates by Morningstar.

“The Municipal market had a really good run in 2021 coming out of the Covid calamity,” says Jim Colby, a Portfolio Manager and Strategist at VanEck adding, “as the new year began, we saw sentiment change by 180 degrees.” Colby oversees six municipal bond ETFs with a combined total of over $6 billion in assets.

Things only deteriorated for Muni investors from there. As the shock of the Russian invasion of Ukraine and spiking commodity prices roiled markets, the tax-exempt segment was not immune to volatility. As of this week, the benchmark S&P Municipal Bond Index has contracted by 5.6% year-to-date.

As selling pressure began to impact the Muni markets in January, the spread between high-grade, tax-free bonds and lower credit grades contracted initially, with Refinativ MMD data indicating a reduction of seven basis points in ten-year municipals with AAA and BBB ratings. This led some market pundits to predict that selling would be short-lived as investors snapped up bonds at more attractive prices.

As February ground on, this relative outperformance for higher-yielding Munis disappeared.

According to Chris Brigati, the Managing Director of Municipal Investments for New Jersey–based Valley Bank, the temporary outperformance by high-yielding segments of the municipal market was a distortion. Brigati identifies liquidity considerations, rather than risk appetite, as a primary driver for the divergence between price moves for higher and lower grade credits.

"An investor who decided to liquidate positions over the past several months has often faced a greater potential loss on a percentage basis selling higher-yielding credits than they would selling a AA or higher-quality credit,” he notes. “They have an incentive to sell the more desirable credits and lock in a loss that is a less substantial percentage of principal and hold riskier bonds at mark-to-market levels above where they could actually sell them.” Brigati, a veteran trader with decades in the market, joined Valley in 2021 to run principal investments in the municipal bond market.

According to many analysts, the near-term prospects of more volatility for Munis remain heightened. Ramirez & Co. Municipal Strategy Group head Peter Block noted in a report issued in mid-March, “Credit spreads are leaking wider, particularly on less defensive structures and/or weaker credits. Given this, our base case through at least April is for tax-exempt underperformance on waning investor demand, driven by volatility, inflation, higher rates, and seasonal factors.” Block anticipates that credit spreads are likely to widen as investors take a defensive posture and increase credit quality.

ETFs: Cutting with a Hatchet, Rather than a Scalpel

The ascendency of ETFs in the Muni market during the first months of the year may have exacerbated the selloff. As of Q4 of last year, FactSet data estimated that of the over $65 billion allocated to municipal ETFs, only $8 billion was actively managed.

According to some strategists, approaching the fragmented municipal bonds in the same passive manner as a stock index creates risks. With over 50,000 credits in the US Muni market and over a million individual issues, many of which trade infrequently, rapid-fire liquidations of passive ETFs can have an outsized market impact.

“The significance of the ETF space has expanded in recent years,” notes Valley Bank’s Brigati. “As they experienced significant redemptions in recent weeks, they have acted in a manner that was less particular about pricing due to the timing of their liquidity needs — cutting with a hatchet rather than a scalpel. This was very apparent in mid-January.”

Municipal markets saw notable divergence among sectors during Covid, with price declines in segments such as higher education and transportation that felt a greater impact from lockdowns. A sharp bounce erased this relative outperformance for the entire market during the second half of 2021.

Key among fundamental drivers is Washington intervention. The Federal Reserve Liquidity Facility emergency program in 2020 enhanced the financial positions of issuers – including Illinois, the lowest-rated state, which received an upgrade from Standard & Poor’s and outlook improvement from Fitch. Meanwhile, the Infrastructure Investment and Jobs Act’s passage in late 2021 earmarked $550 billion in fresh federal spending.

According to VanEck’s Colby, the selling this time has been felt equally across the market for the most part. “The reversal during the first three months has been driven almost entirely by big-picture issues relating to the Federal Reserve’s fight to combat inflation by raising rates and ending quantitative easing, rather than any significant concern over increased credit risk.”

Colby notes that stimulus measures to support state and local governments largely offset fears over lost revenues during the lockdown period. As a result, most issuers emerged with their fundamentals essentially unchanged. Still, he concedes that some Muni bond sectors did have a rougher recovery than others, noting that a small handful of issues in the senior living segment of the healthcare sector, as well as air transport and port facilities, were slower to rebound as staffing shortages and supply-chain issues remained primary hurdles to overcome.”

Among the bullish technical data points for municipal bonds cited by strategists is their performance compared to equivalent Treasury bonds during this year’s drawdown. Currently, the ratio of 10-year municipal bonds to 10-year treasuries stands at roughly 92% versus an average of 93.2% for the past two decades (excluding the crisis period in 2008/09 and the Covid pandemic period in 2020/21). Municipal bonds became extremely expensive on a relative basis during 2021, but levels have since moved sharply higher. This reversal led bullish investors to point out the ratio of municipal bond prices to equivalent Treasury bonds indicates that Munis are cheap on a relative basis.

Despite positive fundamental and technical factors, some investors remain skeptical that markets have seen the end of volatility in the near term.

Valley’s Brigati urges caution as the Muni Market remains susceptible to volatile sell-offs. “We could see a 1-2 standard deviation drift over time on cheapening ratios above 100% and possibly as high as 110% due to market apathy,” Brigati argues. “I’m concerned about a ‘liquidity scare’… where everyone just gets spooked and wants to sell, and there are no buyers.” For arbitrageurs such as Brigati, bid-offered spread gaps and mark-to-market drawdowns would represent opportunity but be painful for long-term allocators.

One looming question facing municipal investors is whether the strong pace of new bond issuance in recent years will continue despite higher yields, increasing supply when fewer buyers are active in the market.

“We expect Munis to underperform for another few weeks, particularly if new issue supply ramps up to $10-$12 billion per week as investors reevaluate allocations to the Muni asset class,” Rameriz’s Block noted in a recent report. “Fortunately, many issuers are cautious on the market at this time, given the unsettled macro backdrop.” According to Block, many new issue deals are currently on week-to-week status given sensitive refunding savings targets.

A brief survey of municipal borrowers for this article indicated few were concerned enough by recent market action to recalibrate plans for bringing new issues to market.

“As a matter of long-standing policy and practice, the City does not try to ‘time the market,’ said Marjorie Henning, Deputy Comptroller for Public Finance for New York City, one of the largest US metropolitan borrowers.

“We do not expect our approach to change materially from past practices,” says Henning. “We have always focused on ways to keep our debt service as low as possible without incurring unnecessary risks.”